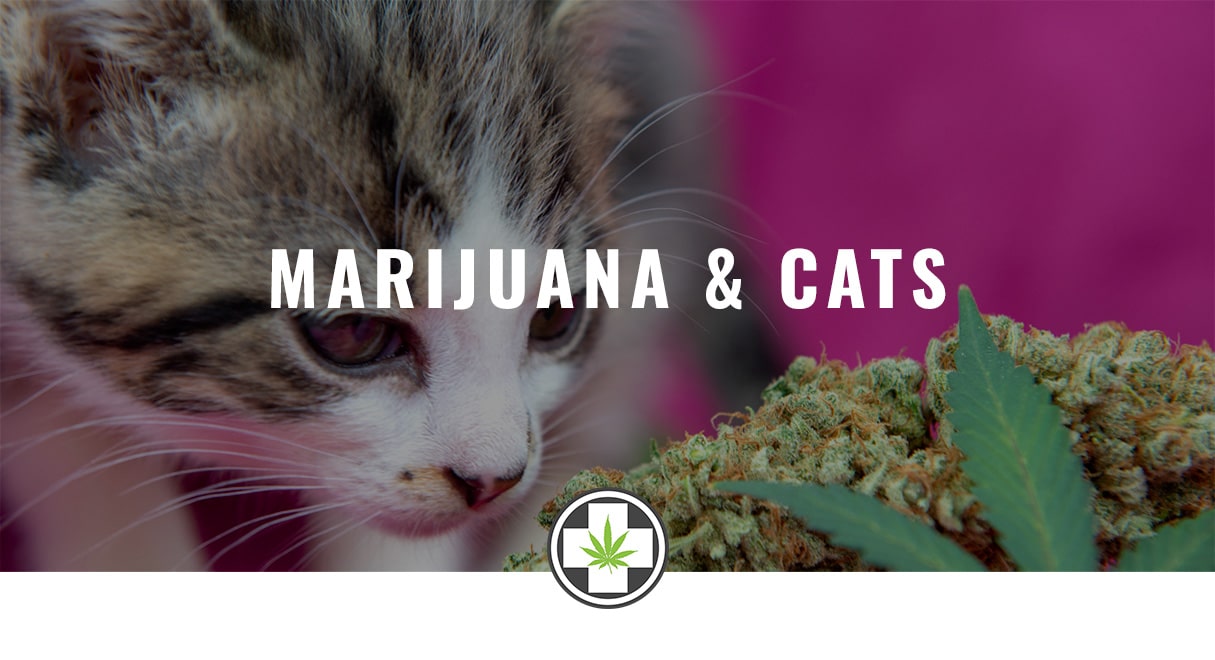 Marijuana And Cats – Do’s And Don’ts

A common worry we hear from our patients is what happens if their pet eats some of their medication. They want to be sure their pet won’t be harmed. Those with older pets might ask whether it could help with their pain just like marijuana does with humans.

The research on the effects of marijuana and pets is sparse but there are a few studies out there. In this piece, we’re going to focus on the research for cats. 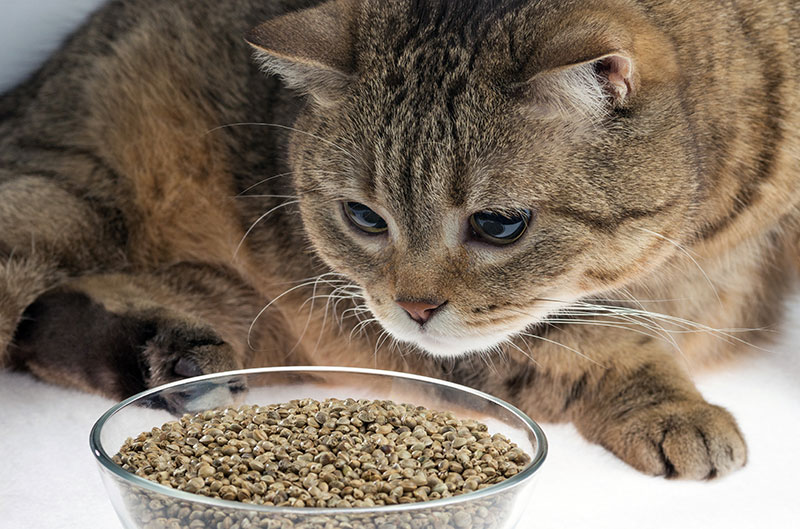 There is a single laboratory-confirmed case study of a cat getting high from marijuana. The owner’s partner was blowing marijuana smoke into the cat’s face as a joke. The minimum toxic dose for THC in a cat is unknown, though in dogs it is 3 g/kg of weight. This is quite a lot of THC but can be reached in edible products made with medical-grade cannabis where the THC level is far higher than natural marijuana.

Noted symptoms of marijuana intoxication in the case study included dilated pupils, anxiety, increased vocalization, drooling, anxiety, and convulsions. More worrisome symptoms are slowed breathing rate, elevated heart rate and blood pressure, and a decrease in body temperature. The effects were short-lived, but if the cat is on medication for heart problems then marijuana could be dangerous. Also, just like some people, your cat may hate the feeling of being high.

There is one route that your pet might be getting marijuana exposure without your knowledge. If you smoke or vape marijuana, the particles in the air may land on your pet’s fur. If they then lick it up, they could ingest some THC. While it’s likely not enough to lead to severe symptoms like in the case study, there could be long-term exposure effects. Cats sometimes get cancers of the mouth this way because their owners smoke tobacco.

Fortunately, the same kind of drug test used in humans to test for marijuana use also works on cats, so if your cat does display strange symptoms they should be able to rule out whether they are high or not. It takes much less marijuana to get a cat (or a dog) high, but just like humans, the pattern of intoxication and body chemistry can change how much and what symptoms appear.

If your cat gets into your medication and eats it, your best bet is to take it to the vet for treatment if you’re worried about an overdose. 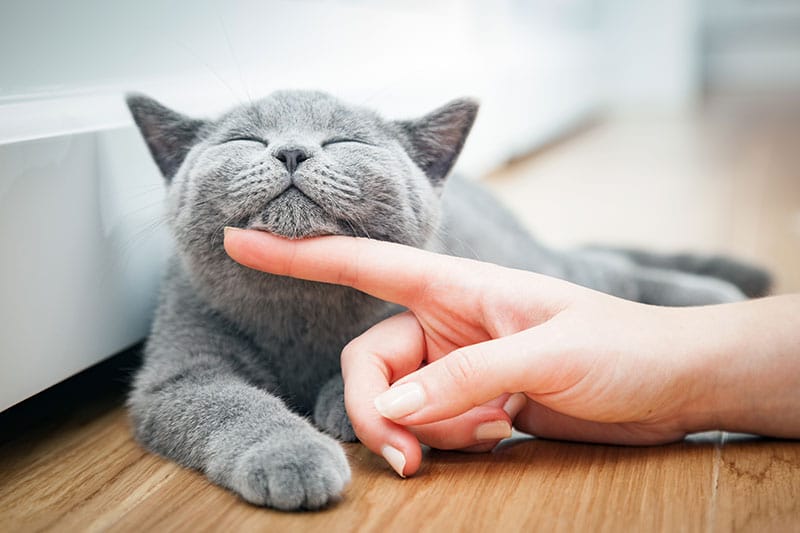 What About CBD for Cats?

THC may cause problems, but CBD seems to be a different story. There are pet owners who experiment with giving CBD to cats for the same symptoms that CBD is used in people. People have reported success treating IBD, arthritis, asthma, and seizures in their cats with CBD. It is not recommended to give CBD to animals that are on SSRIs. CBD increases serotonin and SSRIs prevent serotonin from getting absorbed. This could overload the brain.

The pain relief component would be a breatkthrough in feline health care. Cats do not tolerate most pain relievers. In fact, giving a canine pain reliever to a cat can kill them. Out of compassion, pet owners with CBD oil have taken to dosing their pets, and some vets have taken notice. There is also a small pet-focused cannabis industry that’s trying to get the studies and the legislation to operate legally.

Just like in people, CBD may be the wedge that cracks open the use of marijuana in animal care. One company, ElleVet, is spearheading the effort. They finished a long-term study on cats that showed improvement in mobility issues. Unfortunately, their studies focus on their products rather than generic CBD oil, but it is a promising sign. They have additional studies for feline UTI that are in progress.

Vets who recommend or prescribe CBD are taking a risk, even in legal states. Just because it is legal for people does not mean that the law will cover a vet who prescribes it for an animal, even for CBD products, thanks to federal law and the laws of licensing boards. Nevertheless, some are taking the chance. One vet in Colorado recommends 0.1-0.5 mg/kg for various feline conditions. 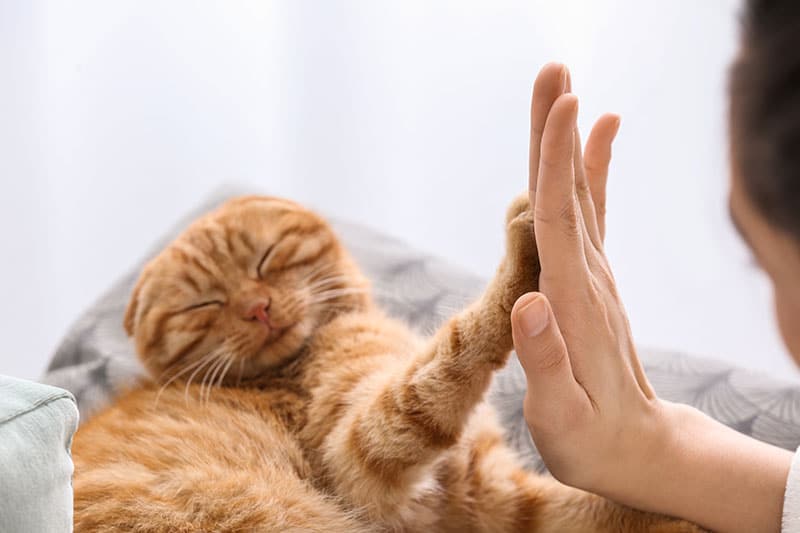 Can I Give The Cat My Medicine?

At this time, it is not recommended to give your cat your medicine, especially medicine with THC. This could be seen as a misuse of the Florida Marijuana Program and could deny you access to medicine if you were caught.

It’s also difficult to get CBD outside of the program legally in Florida. Even though CBD products have been taken off the federal government’s drug list, it is still illegal in Florida to have it outside of the program according to Florida law. A grandmother from California was arrested at Disney World for having legally-prescribed CBD oil. Charges were later dropped.  This is an ironic reversal from the usual pattern of state legalization and federal criminalization.

However, this may soon change. Senate Bill 1020 was signed into law at the end of June. The bill created a state hemp program. CBD oil is derived from hemp, so it is likely there will soon be further legislation that legalizes the use of CBD products for all Floridians, even those who are animals.

If you choose to dose your cat yourself to help with their pain, know that you’re taking a risk. It’s recommended that you speak with a vet before doing it. Even if they can’t formally recommend its use, they can tell you whether CBD might interact negatively with any other medication your cat is using. With luck, and better laws and studies, we’ll be able to do the science necessary to get a clear picture on how to safely and effectively use marijuana for our pets.

Can weed help asthma? There has been a lot of talk about using marijuana for...
Battle The Side Effects of Chemo With Cannabis