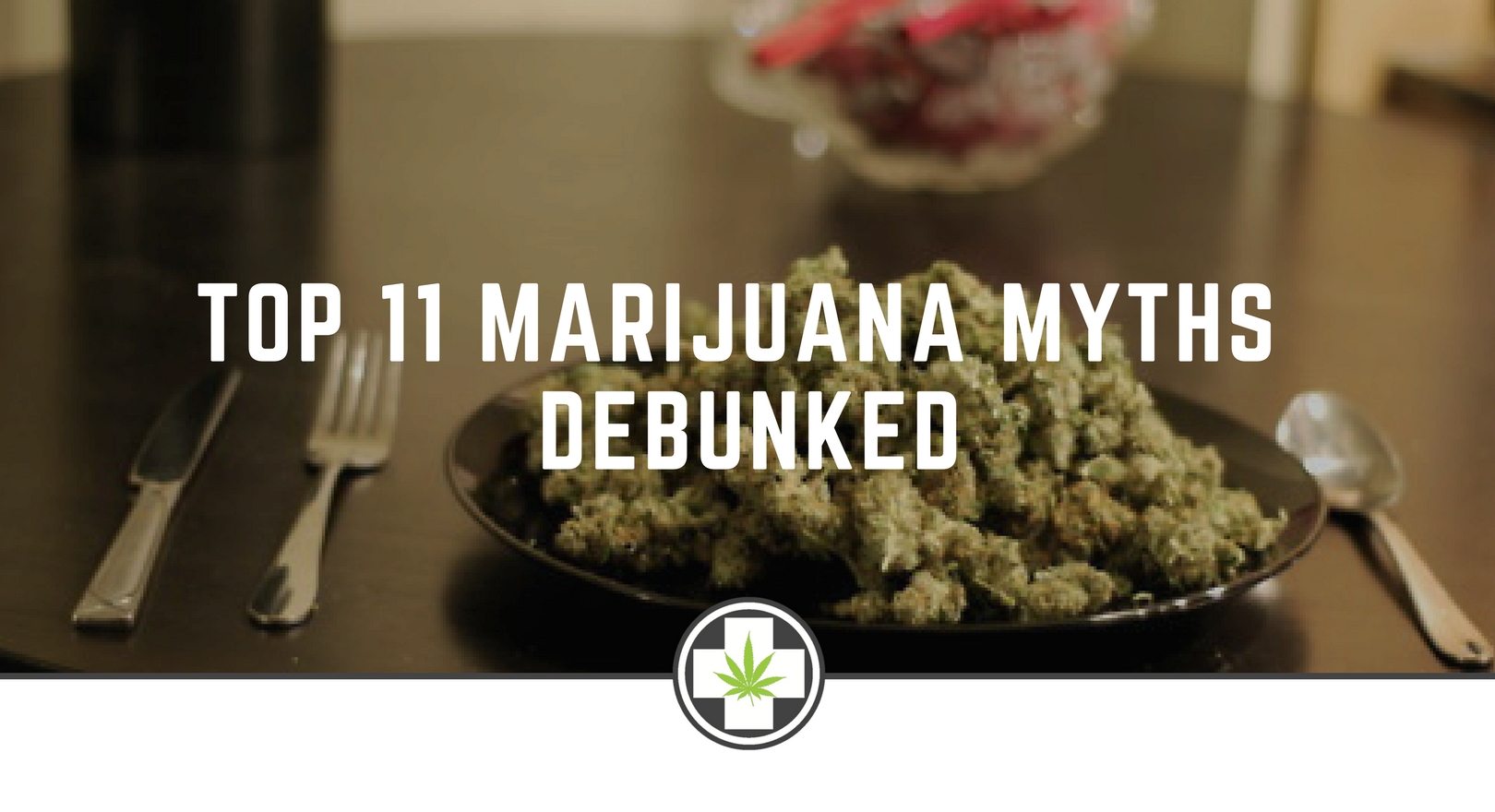 It’s hard to think about marijuana myths without thinking about the movie Reefer Madness.  If you haven’t seen it, it’s a 1930s propaganda film that basically told people that if they smoked marijuana, they’d become deranged criminals who jump out of apartment windows.

(Honestly, that sounds like way more work than your average medical marijuana patient would even want to do.)

Thankfully, times have changed.   Marijuana grows more popular (and legal) every year, and the mainstream media is finally giving it the favorable coverage that it deserves.

But marijuana myths are still out there, circulating the web. And with the rise of “fake news” sites, it’s hard to know what’s true and what’s not.

Our job is to educate people so that they use medical marijuana safely and responsibly.  We want to help you separate fact from fiction, so in this post, we’re going to expose and debunk the top 11 marijuana myths.

We know that bloggers usually do “top 10” lists, but we threw in an extra one.  Because we care.

1).  “Marijuana Use Leads to Brain Damage”

If you were a child of the 1980s, you might remember the “This Is Your Brain on Drugs” commercials. They compared your brain to an egg and a frying pan to drugs because drugs literally fry your brain.

The commercial ends famously with the line, “Any questions?”

Here’s a question:  why does the commercial use “drugs” as a blanket term without drawing a distinction between something like marijuana and something like, say…cocaine?

Cocaine, by the way, can absolutely damage your brain.  Don’t do it.

And yes, there are studies that suggest that marijuana can negatively affect the developing brains of adolescents.  However, there’s no evidence that marijuana causes brain damage in mature adults.

There’s also no evidence that CBD-based medicines have a negative impact on adolescent brains.  Finally, some studies suggest that cannabis can actually protect the brain from diseases like Alzheimer’s.

This is one of those marijuana myths that has been so thoroughly debunked that we wondered if it was even worth mentioning.

To the best of our knowledge, there is ZERO evidence of a person dying as a direct result of marijuana over-consumption.

Sure, people have done irresponsible things while under the influence of marijuana, and they may have died as an indirect result.

But as far as someone consuming so much a marijuana that they died?  Hasn’t happened.  Ever.

In fact, you’d need to consume about 1500 pounds of marijuana in order to overdose.

This marijuana myth was debunked way back in 1999, but it still finds its way into the media and political discourse.

Marijuana is not a gateway drug.  It may be the most commonly used “illicit” substance, but the truth is that most drug users start with cigarettes and alcohol before they use marijuana.  There’s also zero evidence that marijuana use makes people want to try harder drugs.

We feel that the gateway effect of marijuana is a social and legal issue, not a pharmacological one.  Because marijuana is illegal on the federal level and in certain states, people have to go to the black market to get it.  That means they have to buy from drug dealers, who may be selling more than just marijuana…

If a drug dealer has regular pot customers, he or she is more likely to try to sell those customers harder, more addictive and more expensive drugs.

The black market is the true gateway, not marijuana.

A lot of emphasis has been placed on the healing benefits of CBD because of its non-psychoactive.  THC, on the other hand, is considered to be the cannabinoid that “gets you high,” so you don’t really need it.

This couldn’t be further from the truth.  THC has a host of health benefits.  It’s an anti-inflammatory, an antioxidant, a pain reliever…the list goes on.

Some people believe that if you just pull the active ingredients out of marijuana, you don’t need the entire plant.  But it’s not that simple.  There are many compounds that play an important role in the healing power of cannabis:  cannabinoids, terpenoids and flavonoids.  They all work best when they’re working together – a phenomenon known as the “entourage effect.”

6).  “You’ll Increase Your High If You Hold the Smoke In Your Lungs For a Long Time”

To be fair, most of us have fallen for this marijuana myth at some point in our lives, and our lungs have suffered for it.

When you smoke marijuana, 95% of the THC is absorbed into your lungs almost immediately – within the first few seconds.  Holding smoke in your lungs simply prolongs your exposure to carcinogens.  So don’t hold it longer than you need to.

7).  “Blunts Get You More Stoned that Joints”

The reason people feel more stoned when they smoke blunts, as opposed to joints, is because blunts papers are made out of tobacco leaves.  When you smoke a blunt, nicotine enters your system as well as THC, and you wind up getting a buzz from both substances.

Joints, on the other hand, are made out of plain old paper.  There’s nothing intoxicating about them.

Blunts might save you time and rolling papers, but you’re not getting more THC out of your marijuana.  You’re just smoking more marijuana, period.

8).  “Bongs Get You More Stoned than Joints”

“But what about bongs?” you might be asking.  “Surely bongs get you more high than joints!”

First of all, don’t call us “Shirley.”

Second, a study conducted by MAPS and CA-NORML back in 2000 suggests that bongs actually filter out THC, which means that if you use them, you have to smoke more marijuana than normal in order to reach the desired effect.  The same study also showed that bongs generate 30% more tar than an unfiltered joint.

It’s a myth that bongs filter out the bad stuff and increase THC concentration.  In fact, it’s the other way around.

If you’re a guy who uses medical marijuana but you’re afraid of what will happen to “the boys downstairs,” here are some things to keep in mind.

Studies suggest that marijuana use can have a negative impact on your sperm count.  But there’s no evidence that this effect is permanent.

Sperm regenerates in 74-day cycles.  If you’re trying to have kids, put your pipes, joints, vaporizers and edibles away for about three months.  It might improve your chances.

Before we tackle this controversial marijuana myth, we need to say that we at Dr. Green Relief do not advocate or endorse the consumption of marijuana during a pregnancy.  If you’re a pregnant mother who’s considering using marijuana either before, during, or after a pregnancy, you need to consult with your physician and be fully aware of the potential risks.

A study in Jamaica in the 1980s compared 24 pregnant women who used marijuana to 20 women who were non-users.  The researchers found no difference in the cognitive or motor development of the children in either group.

It’s important to note that the researchers admitted that this study was not conclusive and that the social, economic and educational environment of the children may have played a significant role in their development.

In other words, the jury’s still out on this one.

You only need to worry about this if you’re a chronic smoker or you’re struggling with weight issues.

THC is stored in your body’s fat cells, so if you’re constantly smoking marijuana, the THC will definitely build up in your system and linger there.  However, if you only smoke once in a blue moon, the THC should leave your body within a few days.

Do you know of any marijuana myths that weren’t covered in this post?  If you do, give us a shout-out on our Facebook page.  And feel free to contact us directly if you have any questions about marijuana myths or facts!

Medical marijuana has been found to have many medical properties, especially since its mass legalization...
Don’t Get a Marijuana DUI in Nevada

Marijuana and Meditation
Scroll to top Schedule Now CALL US