You are here: Home1 / Health 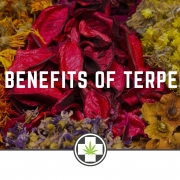 In our last post, we talked about the benefits of cannabinoids.  They’re medical marijuana’s active ingredient — the stuff that makes the medicine work.

But cannabinoids aren’t the only beneficial chemical compounds inside the cannabis plant.  There’s another class of compounds that also contribute to marijuana’s healing properties.  These compounds may not be as popular as cannabinoids; however, they’re still important.

If cannabinoids are the superheroes, then the terpenes are the sidekicks (Batman’s pretty great, but every once in a while, he gets into situations where he needs Robin to back him up).

In this post, we’ll be tackling the benefits of terpenes.  We’ll also list 5 basic terpenes that you should be familiar with.  Once you know these terpenes, you’ll then be able to find more effective and powerful medical marijuana products.

Many plant species, including marijuana, produce terpenes as part of their overall survival strategy.

Terpenes give various plants their specific odors and flavors.  Citrus fruits, herbs and many other plants all smell and taste the way they do because of terpenes.  Oranges, mangoes, ginger, eucalyptus, pine needles – you name it.

Therefore, if you just can’t get enough of the smell and flavor of your favorite marijuana strain, whether it’s Cheese, Bubba Kush or White Widow, you probably have terpenes to thank for that.

But terpenes do more than just decide the flavor profile of medical marijuana strains.  They are also chock full of medical benefits.

Terpenes and “the Entourage Effect”

Cannabinoids and terpenes are both produced in the trichomes of the marijuana plant.  When consumed, they work together — a phenomenon known as “the entourage effect.”

Like cannabinoids, terpenes interact with the human body’s endocannabinoid system.  Furthermore, some terpenes are able to bind to the same brain receptors as cannabinoids.

Some terpenes make it easier for cannabinoids to pass through the blood-brain barrier.  Consequently, the medicine works more quickly than if the terpene were absent.

Terpenes also affect your brain’s production of neurotransmitters like dopamine and serotonin. This is why certain marijuana strains have different effects on the quality of your high and your overall mood.

If you use medical marijuana on a regular basis, then you’re probably familiar with the two main types of marijuana: sativas and indicas.

Sativas give you a burst of energy, creativity and focus — what many call a “cerebral high.”  They’re ideal for daytime usage because they enhance your mood and get you revved up and ready to get things done.  Definitely not a falling-asleep-on-the-couch type of marijuana.

Indicas are on the other end of the spectrum because their flowers produce a more sedative, calming effect.  They’re great for deep pain relief, insomnia and anxiety.  But they’re definitely not something you want to use if you’re about to run errands.

So what makes sativas and indicas act so differently?

Yep, you guessed it: terpenes.

We’re talking specifically about the terpene known as myrcene.  Studies have shown that when cannabis contains less than .04% myrcene, it produces sativa-like effects.  However, when the myrcene count clocks in at higher than .04%, that’s when indica’s “couchlock” sets in.

Whether you’re thinking about using a sativa or an indica, find out what percentage of myrcene is in the product.  You’ll get a good indication of how powerful the effects will be.

5 Terpenes You Should Know About

Now let’s examine the benefits of terpenes by profiling these 5 terpenes that might show up in your medical marijuana products.  Like we said earlier, if you know the terpene profile of a marijuana strain, then you can make a more informed decision about what type of marijuana is best for you.

Flavor profile: hoppy (as in “beer hops,” not like the rabbit).

How to Get the Most Out of the Benefits of Terpenes

Ask your dispensary staff to show you a lab analysis that includes the terpene profile for the strain you’re interested in.  If you tell the staff member what your illness is, then he or she should probably be able to recommend the strain/product with the right terpenes for you.

Additionally, Digipath Labs offers a free patient handbook at select dispensaries, and the book contains a more comprehensive list of terpenes and their benefits.

Mangoes have been long known to increase the rapidity of THC’s effects because it contains terpenes. There are other terpene-containing foods and herbs that, when combined with medical marijuana use, could enhance the power of your medicine.  However, you should always consult with your doctor before combining medical marijuana with other herbal medicines or enhancing agents.

Now that you know how awesome they are, are you ready to reap the benefits of terpenes AND cannabinoids?  Contact us today to schedule an appointment.  Then we can help you get your Florida medical marijuana card and some much-needed relief! 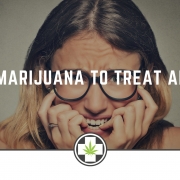 Anxiety. Stress. Drama. We may hate it, but we still have to deal with it.

Because here’s the thing: anxiety is supposed to be good for us!

When we feel anxious, it means our body is warning us that danger is ahead. It’s why we look both ways before crossing the street and avoid areas of a forest where we know the grizzly bears are hanging out.

Anxiety helps us stay alive. It’s like your own ADT security system, only it’s inside you.

The problem is when you can’t turn that security system off.

Imagine if you had a home alarm system going off all the time, even though there’s nobody breaking into the house. You’d go crazy! You’d have to move out of that house, no question.

That’s what chronic anxiety can feel like. It’s so pervasive and enduring that it interferes with your ability to work, sleep, maintain healthy relationships with others, and be happy.

So can you use medical marijuana to treat anxiety?

Yes. Yes, you can. Provided it’s the right kind of marijuana!

Why Medical Marijuana Helps You Relax

When you use medical marijuana, its active ingredients – cannabinoids – interact with your body’s endocannabinoid system.

(We know that’s a mouthful, but don’t worry. You don’t have to say it; you just have to know how it works).

So what does your endocannabinoid system do?

Well, a lot actually, but one of the things it does is controls your moods – in other words, it manages how you feel.

Now this is the very important part:

The two most popular cannabinoids are THC and CBD.

THC is known mostly for its psychoactive effect (the marijuana “high” that we all know and love), and CBD is popular because of its anti-anxiety properties.

Both THC and CBD have many other benefits, but we need to focus on these two for now.

Because as it turns out, the amount of THC and CBD in your marijuana will determine whether it’s the best type of marijuana to treat anxiety.

What is CBD:THC Ratio?

For example, some products might have a 0:1 ratio – which means it’s all THC.

Others might have a 2:1 ratio, which means the product contains twice as much CBD as it does THC.

Because THC gets you “high,” many patients make the mistake of thinking that the best products are the ones with the most of THC.

While there’s nothing wrong with high-THC-percentage products (they can be very effective at treating highly severe pain), it’s important to remember that more does not equal better.

Especially when it comes to managing anxiety.

Because if you take too much THC, you may experience anxiety as a side effect, which is something you want to avoid if you’re using medical marijuana to treat anxiety!

CBD and THC work best when they’re working together, a phenomenon known as “the entourage effect.”

More specifically, CBD counters the anxiety that THC can cause; it makes you feel more relaxed as a result.

So if you’re using marijuana to treat anxiety, you definitely want to consider products with at least a 1:1ratio.

The general rule of thumb is that the higher the CBD number, the more relaxed you’ll feel. Consequently, you’ll also experience less of THC’s euphoric effects.

For this reason, some patients may find that these “CBD-favored” products are a better fit for them, especially if they need to medicate during the day but want to keep a clear head!

Have you ever used medical marijuana to treat your anxiety? What were the results? We want to hear your stories, and we know our other readers do too! Please give us a shout-out on our social media pages.

And if you don’t have a medical marijuana card, and you suffer from a qualifying illness, schedule an appointment with our doctor so we can get you on the path to pain relief!